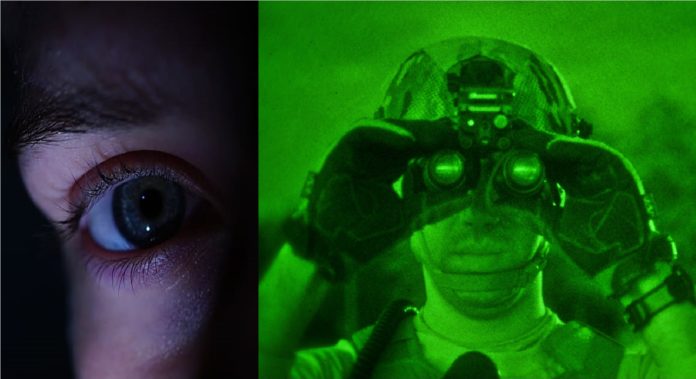 The night vision ability in nocturnal animals and deep-sea creatures has always fascinated scientists. This has led the way for night vision binoculars, and now bioengineered night vision.

The most common way in which we have been able to replicate this ability is with the use of night vision binoculars. These detect the thermal waves emitted by bodies and convert them into electrical signals. This then forms a visual image.

Night vision binoculars are large and bulky. In their primary use in the military, these are not desirable features.

Researches are taking a step further to find a better solution. In 2007, Ilyas Washington published a research paper. It states the use of Chlorine e(6), a chlorophyll derivative. Chlorine e(6) successfully improved normal human vision in the dark. Ilyas’s work was an inspiration from the dragonfish’s ability to see in the deep dark waters.  The dragonfish’s response to red light in the darkness is similar to human’s response to the green light in the same setting. Therefore, using the same chlorine e(6) that allows the dragonfish to see better, a human trial formula came about.

Several years later, in March 2015, two biohackers that refer to themselves as the group “Science for the masses“, were able to conduct successful bio-engineered night vision experiments employing this method.

Medical officer, Jeffrey Tibbetts, and Biochem researcher Gabriel Licina previously worked on vitamin A to achieve these results. But after finding Ilyas’ work, they experimented themselves.

Tibbetts micro pipetted a small dose into the speculum stretched eyes of Licina. The conjunctival sac would then carry the chemical to the retina.

The chemical dissolved right away and the effects started kicking in within an hour of the dose.

Licina was able to distinguish moving objects in the dark as far as 50 meters away. While the other control subjects could only see the target objects 30 per cent of the time, Lincina was successful throughout.

The most recent breakthrough in bio-engineered night vision was in 2019. Led by the University of Science and Technology China, the technology used nanoparticles.

Nanoparticles adhered themselves to the photoreceptors (cells) in the retina. This allowed them to detect Near-Infrared Radiations (NIR).

Mice detect similar wavelengths as humans in the dark. Thus used for their experiments, which included swimming through a maze in the dark. The results were promising, with about no significant side-effects.

The nanoparticles lasted 10 weeks inside the rodents’ eyes. In humans, researchers expect it to last a similar duration as well.

One concern that comes with injecting night vision nanoparticles is the side effects it could have.

In the Lincina and Tibbetts experiment, Lincina’ eyes had temporarily become oversensitive to light. He had to wear protective black sclera lenses to adapt better in the daylight.

Additionally, Chlorine e(6) is used in the treatment of cancer. It is not a benign chemical.  Ce(6) is triggered to kill cells when activated by the light. Therefore it poses its risks.

For now, it is safe to assume that even though the scientific data is present, actual commercialization of these magic night vision chemicals can not be predicted just yet.