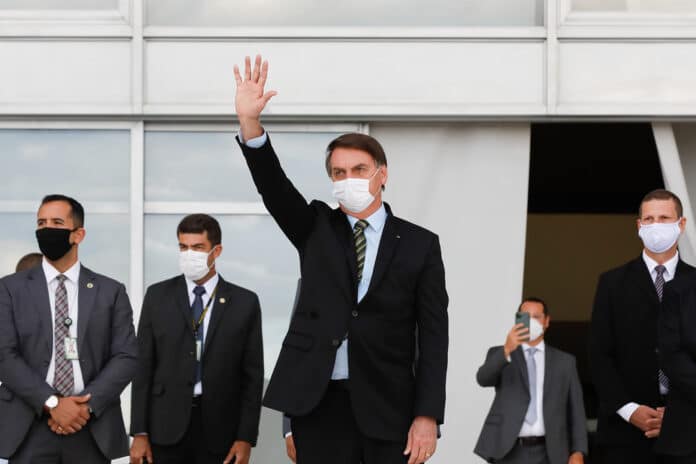 Coronavirus case numbers have been rising for a while now, even as lockdown restrictions ease in some parts of the world, more cases soon follow. Now another case has come to light after the Brazillian president, Jair Bolsonaro announced on live television that his tests for coronavirus have come positive.

He told a group of carefully selected reporters outside his residence about the nature of his results while wearing a mask. The president said he is not afraid because that’s just how life goes and it goes on regardless. He thanked God for being able to decide the future of Brazil and how grateful he was for his responsibilities.

The president of Brazil, aged 65 has in the past consistently trivialized the intensity of the pandemic despite seeing Brazil become the second worst-hit country after the US. From coronavirus, the country alone has experienced more than 65,000 deaths including 1.6m confirmed sufferers.

Coronavirus cases in Brazil, therefore, have become a cause for great concern.

Brazil saw its first coronavirus cases in early March; Bolsonaro addressed the nation than to brag that he could not suffer from coronavirus for long given the athletic background that gives him a health advantage over the virus.

Since then it has been common to see Bolsonaro attending social events and also political rallies; disrespecting social distancing guidelines. Often enough, the president was also seen wearing masks the ‘wrong’ way or sometimes seen ditching them altogether.

After giving the news of his positive test results to the reporters on Tuesday, Bolsonaro made a show by removing his mask and saying he is fine and well thanks to the people who pray for him.

Despite having contracted the lethal virus, Bolsonaro continued to dismiss what he calls ‘overblown’ efforts made by Brazilian governors and mayors to contain the virus through shutdowns and implementing social distancing.

He complained about authorities who forbid Brazilians from visiting the beach, contending that most Brazilians who catch the virus often feel nothing.

Despite the president’s casual remarks coronavirus cases in Brazil have accounted for a large number of deaths and more are still expected.

Bolsonaros’ diagnosis of coronavirus came just a few days after he visited US ambassador Todd Chapman’s house for lunch.

Bolsonaro’s illness from coronavirus first came up on Monday when local outlets talked about him having developed worrying symptoms such as a 38C temperature and a reoccurring cough.

Bolsonaro also underwent an MRI for his lungs, the results of which he later claimed to be clear and healthy.

Reports from local newspapers said the president had begun to feel unwell since Saturday night but continued to downplay his symptoms. Bolsonaro has previously also dismissed the risks brought by coronavirus cases in Brazil and has urged the nation to return to work to save Brazil’s economy. Now however in his family he is the second member to contract the disease.

Also Read: Brazil Continues to Use Hydroxychloroquine for Coronavirus Treatment

Internationally and domestically Bolsonaro’s response to the pandemic has brought much criticism. People place blames on his lack of seriousness for the high death number taking place in Brazil because of the coronavirus pandemic. As of yet, Brazil has no permanent minister of health after two ministers were fired when they disagreed with the president over the nature of the pandemic.

As Brazil’s death toll continues to rise, it could soon come second on the list of countries suffering most from the pandemic. This is a worrying health crisis for Brazil and if proper measures are not taken could prove fatal for many.