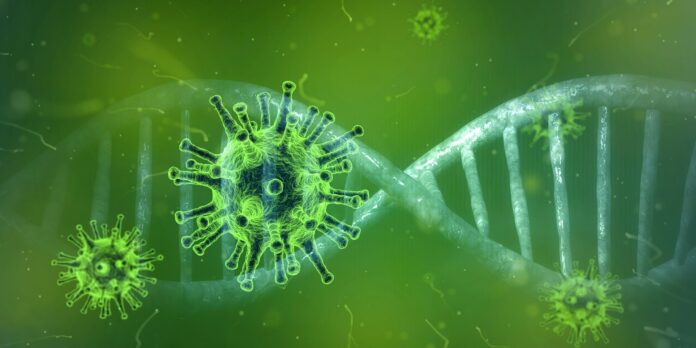 The coronavirus is a threat experienced globally and now scientists are speculating what makes it as dangerous as it is. They are trying to understand whether the coronavirus mutation makes the virus more contagious as is commonly believed, says a report.
The mutation in question is officially called D614G but is usually referred to as “G” as a short form. The mutation “G” is able to change the virus’s spike protein; this is the structure that lets it enter into human cells. The more operative the spike protein is, the better it can penetrate the body of a host.
Research regarding this mutation suggests that it changes amino acid 614 from “D” (aspartic acid) to “G” (glycine). This is significant because the spike protein may be making it more effective, thus enhancing the virus’s infectiousness.
Also read: Is this New Chinese Flu-Like virus in Pigs another Coronavirus?
Researchers found this significant mutation in roughly about 50,000 genomes of the virus from a shared database. 70 percent of the uploaded virus data contains this specific mutation. This may suggest that it is what makes the virus as contagious as it is.
Hyeryun Choe is a virologist at Scripps Research. Choe says the epidemiological study and their data in combination explain why the (G variant’s) spread took place in Europe and the U.S and why it was so fast. He says this speed in the spread was not just by chance but due to a reason.
In the mutation, the parts on the surface of those proteins, the ones that bind to the human receptor are less likely to break apart, which was a flaw in the SARS-CoV-2.
This faulty mechanism made the SARS-CoV-2 have a difficult time attacking host cells. He explains that the “G” has several spike proteins and this is why it is responsible for making the mutation ten times more contagious in lab experiments.
Choe thinks the mutation took place to compensate for where it lacks.
Their study is not the only study that found this mutation to be as contagious as it is. The mutation was also discovered to be more infectious in four more studies that have yet to receive a peer review. One study is by scientists from Los Alamos National Laboratory. They conclude that sufferers with the “G” mutation also have a larger virus load in their bodies, making them a high-risk candidate to spread the virus.
Other researchers however believe there are not enough studies that determine how effective this mutation is in the spread of coronavirus. Jeremy Luban is a virologist at the University Of Massachusetts Medical School. He concludes nothing specifically definitive has been seen yet
Choe however emphasizes the fact that this coronavirus mutation does not make it more lethal and instead only makes the virus more contagious. How contagious a virus is only making it more spreadable among the population but it does not necessarily mean it will kill more people due to this mutation.
While researchers have come far from the beginning of this pandemic, there is still a long way to go with developments in research on how the coronavirus mutation affects its behavior. Until substantial progress takes place, much is left to the imagination to conclude.