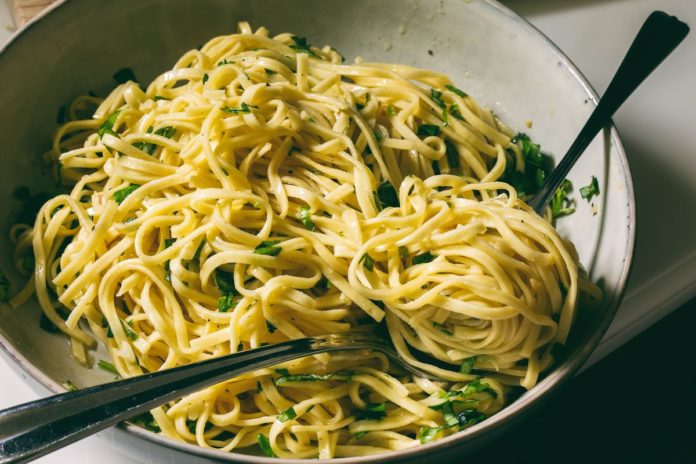 Pasta is generally considered as a high-calorie, unhealthy, and a part of ‘not to eat; list during a weight loss diet. But a new study has suggested that eating a high carb diet including pasta in it is equally beneficial for weight loss as a low-calorie, restricted carbohydrates diet.

These research findings are contrary to the popular belief that pasta is unhealthy and has no place in an ideal balanced diet. In addition to this, it is linked with causing weight gain and obesity in weight watchers. It is strange that this new study has revealed that pasta has hidden benefits for lowering the body mass index (BMI) as it leads to a thinner waist and no stubborn belly fat, especially in men. In a way, it also reduces the risk of certain heart problems and diabetes type 2.

The problem with this unhealthy image of pasta is linked with its higher carbohydrate levels. Carbohydrates are not always bad for health and they are also a part of a balanced diet, unlike popular beliefs. A study investigated the weight loss patterns in more than 800 participants, which were overweight and struggling to lose this unwanted fat.  These participants were put on different levels of carbohydrates based diet that includes 65%, 55%, 45%, and 35% carbs.

Additionally, this study also conducted 29 randomized tests where the effects of pasta on BMI were studied in detail. These clinical trials showed that low glycemic foods, such as pasta cause a reduction in BMO and lower body weight with comparison to high glycemic food options. Not many people know that pasta has a very low glycemic index which is generally between 33 and 61. However, adding high-calorie ingredients such as full-fat cheese might increase it. comparing it with other ‘unhealthy’ food options such as boiled potatoes shows that even these potatoes have a high glycemic index (78) on average.

This study suggests that pasta is indeed a part of a weight-loss diet and it is not always unhealthy. Pasta is a common part of the Mediterranean Diet, which is also a popular choice when it comes to the most effective weight loss diet recommended by experts. Even the American Diabetes Association recommends the Mediterranean diet for its amazing weight loss benefits.

Regardless of which type of pasta a person chooses, this property of pasta is a low glycemic food that doesn’t change. Spaghetti, lasagna, fettuccini, penne, spiral all of these pasta types are made with semolina flour and hence share the same nutritional value. What makes it ‘unhealthy’ is probably the choice of toppings and seasonings which increase its total calories.

There are various recipes to cook pasta; among which some are healthy and diet-friendly. To avoid the extra calories, find a recipe that fits into your daily calorie count and doesn’t hinder weight. Some suggestions include to cook it with vegetables, use homemade sauces instead of commercially available sauces, use fresh ingredients instead of canned options, and use fresh seasoning instead of using dry mixed spices. In this way, pasta could be a part of almost every popular weight loss diet.