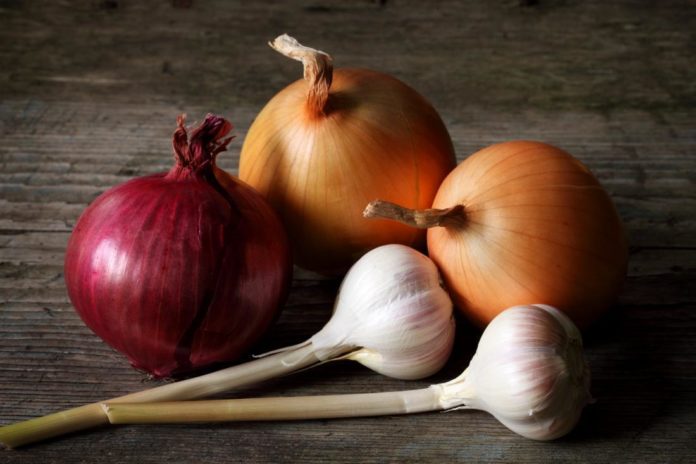 Garlic and onion belong to the same genus Allium. Both have a strong odor and are used for adding flavor and taste to food. Besides these, garlic and onion have properties to protect us against type 2 diabetes, prostate, colorectal and stomach cancers.

Thus, both of them help in reducing the risk of different cancers However, no evidence linked their consumption with the reduced risk of breast cancer before the recent study.

The results of this research study are published in the journal Nutrition and Cancer.

Investigation of the effects of garlic and onion

Gauri Desai from the University of Buffalo led the research. She with her research team worked on the female population of Puerto Rico. She presented two reasons to conduct the study on this island.

One of the reasons is that the incidence of breast cancer in Puerto Rico is lower than the mainland of the United States. Secondly, the whole island population widely consumes a traditional sauce namely “sofrito”. It majorly consists of garlic and onion, which arose the interest to conduct the study there.

The research team collected the data from hospital records of 314 women age between 30 to 79 years. These women had a history of breast cancer during the years 2008 to 2014.

The research team used food frequency questionnaires to ask the women about their dietary patterns. They also inquired about their garlic, onion and sofrito intake.

The study found the link between garlic and onion consumption and the decreased incidence of breast cancer. The results were the same when researchers stratified the findings of the study based on the menopausal status.

However, the team surprisingly found another result. They observed that sofrito alone, when consumed once or twice a day, reduced the risk of breast cancer by 67%.

How do garlic and onion reduce breast cancer risk?

The research was observational and did not focus on the mechanism of action. However, researchers think that the reduced cancer risk is because of organosulfur compounds and flavonols present in garlic and onion. They have anti-cancer properties.

In garlic, s-allyl cysteine and diallyl sulfide and diallyl disulfide are particularly responsible for the preventive effect. Similarly, in onion, alkenyl cysteine sulfoxides are important.

These compounds have shown protective results against cancers in both humans and experimental animal groups.

The researchers mentioned the limitations of the study as well. They told that the study was conducted on a small population that cannot represent the large population.

Secondly, the reference group including women with no or less consumption of garlic and onion was also small. The third limitation was the recipe of the home-made sofrito that may vary from person to person on the island.

Therefore, researchers suggest conducting further researches on this topic to validate the results of this study.