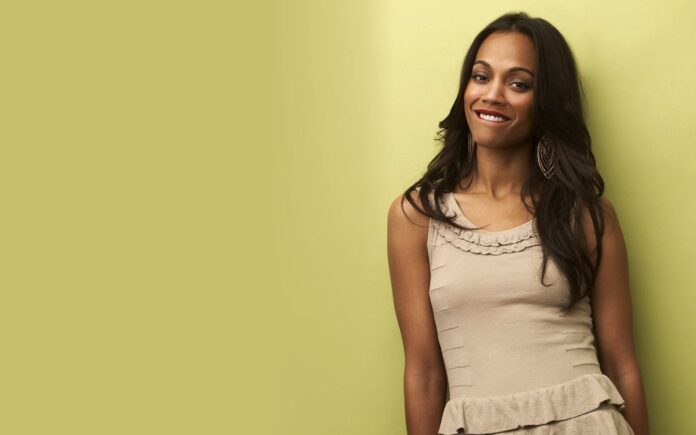 The famous Hollywood actress Zoe Saldana has blazed the social media while she decided to post a picture wearing a pink bikini for a supposed good cause- breast cancer awareness. The 42- years old diva absolutely stunned the viewers wearing a two-piece bikini in her super eye-catchy picture posted on her Instagram account this Monday.

Zoe was spotted wearing a pink bra and a bikini bottom and she captioned this picture dedicating it to the breast cancer awareness month. She wrote she is wearing the color pink as an attempt to honor all women that have defeated or are battling breast cancer. She also tagged an account saying that she is joining a friend for a noble cause of breast cancer awareness. She posted this photo with a hashtag “#kitstokickcancer!”

This clothing store that Saldana tagged has joined the Women’s Cancer Research Fund (WCRF). So the 5% of all sales at this brand are donated to the cancer research fund for this month of October. In addition to this, they will donate $1 per entry if someone decides to post a picture wearing their undergarments and tagging the brand.

While it looks like that this picture was posted for a noble cause, there are many followers who were more focused on the actress’s body and her exceptional good looks. The comments under this photo call her beautiful, pretty in pink, and too good for a mother of three. Other celebrities such as Naomi Campbell have also appreciated Saldana’s post, leaving heart emojis under this post.

On this same day, Saldana has also announced about launching a new Adidas collection calling it a reflection of her natural creativity.

The pink ribbon represents breast cancer and is used worldwide for raising awareness of cancer. The color pink is symbolically worn for promoting breast cancer awareness especially in the month of October, which is considered National Breast Cancer Awareness Month.

It was first used in 1991 after a breast cancer survivor named Charlotte Haley started sending this pink-peach ribbons to spread awareness on this deadly disease that she battled. After that, the pink ribbons became a trend along with yellow ribbons and red ones that used to represent support for AIDS and troops.

At the somewhat same time, the Susan G. Komen Foundation started to hand out all their participants some pink visors during their “Race For A Cure” events.

This pink color was also selected by Self Magazine in 1991 for their first-ever Breast Cancer Awareness Month issue.

This pink that is used for breast cancer representation is a selective shade called “150 pink” and was picked for the playful, relaxing, and soft nature.